It was recently announced that Pope Francis had decided to allow Eastern Catholic bishops anywhere in the world to ordain married men to the priesthood. Previously, even if Eastern Catholic bishops in their homelands could ordain married men, this was not allowed in other parts of the world, including North America. The tradition of ordaining married men to the priesthood is very strong in the Christian East: for many centuries the norm in those churches has been that the parish priesthood is mostly married while the charism of celibacy is preserved in the monasteries and the episcopate. This tradition continued in the Eastern Churches that came into full communion with Rome beginning, for the most part, in the 16th century.

Towards the end of the 19th century increasing numbers of immigrants from eastern and central Europe came to North America. Many of them were “Greek Catholics” (at that time mostly Ukrainians and Ruthenians) who were accompanied by their married priests and their families. But the presence of such married Catholic priests in the United States caused great concern in the hierarchy, who felt that preserving the unity of their Catholic flock required uniformity in discipline, including celibacy of the clergy. Even after hearing warnings that such a decision could result in a schism among Eastern Catholics, they felt so strongly on this point that, at a meeting in 1893, the country’s Catholic archbishops unanimously adopted this resolution: “It is the solemn judgment of the Archbishops of the United States that the presence of married priests of the Greek rite in our midst is a constant menace to the chastity of our unmarried clergy, a source of scandal to the laity and therefore the sooner this point of discipline is abolished before these evils obtain large proportions, the better for religion, because the possible loss of a few souls of the Greek rite, bears no proportion to the blessings resulting from uniformity of discipline.”

Eventually the Holy See responded to repeated petitions of this type, and in first half of the 20th century issued a number of decrees that had the effect of banning the ordination of married men to the priesthood not only North America but everywhere in the world outside the traditional territories of these Eastern Catholic Churches, mostly in eastern Europe and the Middle East. True, a number of married Eastern Catholic priests have always been present in the United States and elsewhere, but virtually all of them were ordained by bishops overseas where the practice was allowed.

As the recent document lifting the ban acknowledges, the Holy See’s action resulted in as many as 200,000 Eastern Catholics leaving the Catholic Church and becoming Orthodox in order to retain their married clergy. This was a devastating loss to the Eastern Catholic communities in the United States and elsewhere. Eastern Catholics have long felt that the ban represented a great injustice, a lack of respect for their ancient traditions, and for the terms by which they entered into full communion with the Catholic Church centuries ago.

Attitudes towards this issue began to shift in the wake of the Second Vatican Council, which called for each Eastern Catholic church to “retain its traditions whole and entire” (Orientalium Ecclesiarum n. 6), and spoke of the “holy vocation” of those individuals who have received both the sacraments of marriage and priesthood (Presbyterorum Ordinis n. 16). Gradually the Catholic bishops of several countries, including Canada and Australia, went on record as having no objection to the restoration of a married Eastern Catholic priesthood. Speaking at a gathering of Eastern Catholic Bishops from around the world in Boston in November 1999, Bishop Wilton Gregory, then bishop of Belleville and vice president of the USCCB, commented on the growing acceptance of married Eastern Catholic priests, assuring them that “if in the judgment of our Eastern Catholic brothers in the episcopate such a resolution would be helpful, I believe that the bishops of the United States would give it the highest consideration.”

This question also has an ecumenical dimension. Just last June the North American Orthodox-Catholic Theological Consultation issued an agreed statement calling for a lifting of the ban. They wrote: “This action would affirm the ancient and legitimate Eastern Christian tradition, and would assure the Orthodox that, in the event of the restoration of full communion between the two Churches, the traditions of the Orthodox Church would not be questioned.”

The fact that Pope Francis has decided to allow Eastern Catholic bishops anywhere in the world to ordain worthy married men to the priesthood is a great step forward. He has recognized that the validity of Eastern Catholic traditions is not limited to certain geographical areas, but applies to those churches wherever they may be found. The Latin practice of ordaining celibate men to the priesthood remains intact and unthreatened by those observing a different tradition. The presence of an increasing number of married Eastern Catholic priests in our midst should be welcomed because “far from being an obstacle to the Church's unity, a certain diversity of customs and observances only adds to her splendor, and is of great help in carrying out her mission” (Unitatis Redintegratio, n. 16).

Father Ronald Roberson, CSP is associate director of the Secretariat for Ecumenical and Interreligious Affairs of the U.S. Conference of Catholic Bishops. He is also a consultor to the Vatican's Congregation for the Oriental Churches. 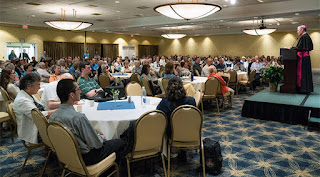